The Irish Diaspora: Tales of Emigration, Exile and Imperialism

From the first voyages of Saint Brendan in the early sixth century, an estimated 10 million people have left the Irish shores for other countries, and today, more than 80 million people worldwide claim Irish descent. In the centuries after the fall of Rome, Irish missionaries carried the word of the Christian God throughout Europe, while soldiers and mariners from across the land ventured overseas in all directions. The advent of the British Empire ignited a slow but extraordinary exodus from Ireland. These “Wild Geese” who opted to live outside of the Protestant state took their chances in the Spanish and French empires, as well as in the fledgling New World. These immigrants played an important role wherever they went: rising to high political and military positions in France and Spain, impacting the foundation of the United States, and fighting in the Civil War that followed it nearly eighty years later. Other Irish would come to the fore in business, science, engineering, and the arts, while some were destined for infamy as mobsters and gunslingers. Historian Turtle Bunbury explores the lives of these men and women, great and otherwise, whose pioneering journeys beyond the Irish shore have played a profound role in world history and have left their indelible mark far beyond Ireland. Throughout The Irish Diaspora, Bunbury takes these overlooked events and characters and weaves them into an entertaining, and often surprising, history of the Irish abroad. 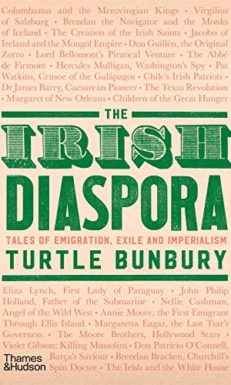 You're viewing: The Irish Diaspora: Tales of Emigration, Exile and Imperialism €24.40
Add to cart