The Alliance of Pirates: Ireland and Atlantic piracy in the early seventeenth century

In the early part of the seventeenth-century, along the southwest coast of Ireland, piracy was a way of life. Following the outlawing of privateering in 1603 by the new king of England, disenfranchised like-minded men of the sea, many former privateers, naval sailors, ordinary seamen and traditional plunderers moved their base of operations to Ireland and formed an alliance. Within the context of the Munster Plantation, many of the pirates came to settle, some bringing families, and these men and their activities not alone influenced the socio-economic and geo-political landscape of Ireland at that time but challenged European maritime power centres, while forging links across the North Atlantic that touched the Mediterranean, Northwest Africa and the New World. Tracing the origins of this maritime plunder from the 1570s until its heyday in the opening decades of the 1600s, The Alliance of Pirates analyses the nature and extent of this predation and looks at its impact and influence in Ireland and across the Atlantic. Operating during a period of emerging global maritime empires, when nations across Europe were vying for supremacy of the seas, the pirates built their own highly lucrative and powerful piratical state. Drawing on extensive primary and secondary historical sources Connie Kelleher explores who these pirates were, their main theatre of operations and the characters that aided and abetted them. Archaeological evidence uniquely supports the investigation and provides a tangible cultural link through time to the pirates, their cohorts and their bases. 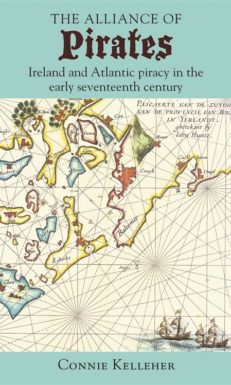 You're viewing: The Alliance of Pirates: Ireland and Atlantic piracy in the early seventeenth century €29.00
Add to cart