Mayflies in the Heather

‘Mayflies in the Heather’ is deeply rooted in the local, fluent in the language of Lough Corrib. Art Ó Súilleabháin is the cartographer as he maps his own area, illuminating every wing-picked insect, every curlew flight, reed and stone, replete with the lore of places.

Art Ó Suilleabháin’s poems combine a sophisticated wit, rare emotional honesty, and a lyricism which has its roots in the Irish language, of which he is a native speaker. The poems in this book will startle and soothe the reader in almost equal measure. They are rooted in tradition but the voice in which they speak is gloriously twenty first century.– (Kevin Higgins)

Art Ó Súilleabháin was born and reared in Corr na Móna and Boston and worked in various locations around Ireland and the USA. He has published a number of poetry books in Irish for children. He is now settled permanently in Corr na Móna, Connemara, Ireland. He spends his time writing, fishing, woodturning, reading and walking. 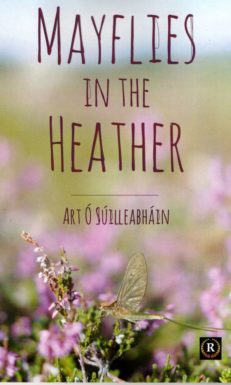 You're viewing: Mayflies in the Heather €12.00
Add to cart