This special edition of James Hardiman’s (1782-1855) ‘History of the Town and County of Galway’ commemorates the bicentenary of its original publication in 1820. Hardiman was probably born in County Mayo, however, his formative years were spent in Galway. He developed his passionate interest in the history of the town through his work as a sub-commissioner in the Public Records Office in Dublin Castle. In his preface he states that his work enabled him “to investigate with greater accuracy the history and antiquities of this ancient and respectable town”. The book lists civic office holders and gives accounts of the county’s ecclesiastical foundations, charities and schools. His description of early nineteenth century Galway has proved to be of invaluable significance to later historians. His reports for the Commissioners have acquired a particular significance as many of the original documents were destroyed in the destruction of the Public Record Office in 1922 during the Irish Civil War. 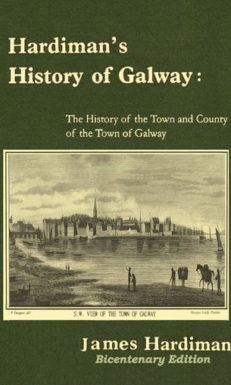