Ceremonial death is the focus of a major rite of passage, leading the individual from the world of the known to that of the unknown. This book describes funerary traditions and superstitions in the midlands, in particular in counties Roscommon, Longford, Westmeath and Offaly and also in adjoining areas of Galway, Leitrim, Mayo and Sligo. Folklore collected by James Delaney, a full time collector in the midlands, from the 1950s to the 1980s, is the primary source. Material from earlier folklore collectors has also been used. The book describes Death, Wake, and burial customs, in particular, in the nineteenth and early twentieth centuries. Fear of death had a major influence on funerary rites and traditional customs were employed to overcome and control that fear. The role of the community in rites-of incorporation and in transitional rites of passage from the home to the grave is emphasized, while the centrality of the role of women in relation to death rituals is highlighted. 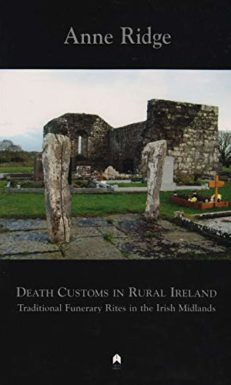