Champagne Football: John Delaney and the Betrayal of Irish Football: The Inside Story

In Champagne Football, Tighe and Rowan dig deep into the story of Delaney’s career and of the FAI’s slide into ruin. They show how he surrounded himself with people whose personal loyalty he could count on, and a board that failed to notice that the association’s finances were shot. They detail Delaney’s skilful cultivation of opinion-formers outside the FAI. And they document the culture of excess that Delaney presided over and benefited from, to the detriment of the organization he led.Champagne Football is a gripping, sometimes darkly hilarious and often enraging piece of reporting by the award-winning journalists who finally pulled back the curtain on the FAI’s mismanagement. 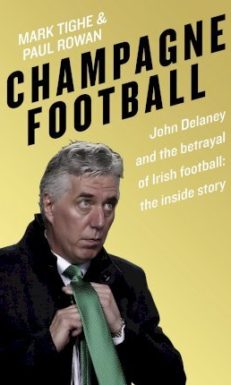 You're viewing: Champagne Football: John Delaney and the Betrayal of Irish Football: The Inside Story €14.99
Add to cart
This website uses cookies to improve your experience. We'll assume you're ok with this, but you can opt-out if you wish.Accept Read More
Privacy & Cookies Policy

This website uses cookies to improve your experience while you navigate through the website. Out of these, the cookies that are categorized as necessary are stored on your browser as they are essential for the working of basic functionalities of the website. We also use third-party cookies that help us analyze and understand how you use this website. These cookies will be stored in your browser only with your consent. You also have the option to opt-out of these cookies. But opting out of some of these cookies may affect your browsing experience.
Necessary Always Enabled

Any cookies that may not be particularly necessary for the website to function and is used specifically to collect user personal data via analytics, ads, other embedded contents are termed as non-necessary cookies. It is mandatory to procure user consent prior to running these cookies on your website.